Love ‘em or loath ‘em, on the whole, we ladies have to wear bras.  They strap us in, bolster us up, and, not putting too fine a point on it, stop things, well, bobbing about.

I was in Marks and Sparks the other day when there was an announcement over the tannoy reminding us that there was a ‘Bra Fitting Service’ available in the lingerie department.   Well, since I was there to buy some underwear (well, why else would I be there…can’t afford the food..), and I was feeling pleased with myself for losing some flab since last time I bought such items (ok, that was some time ago as the tired old once-white scaffolding I was wearing at the time would testify), so I thought I’d take advantage of their most kind offer to reassess my size.

I picked the chosen confections from the rack in the size I thought I probably was, and stood and waited at the door of the fitting rooms.

‘Have you made an appointment’ ‘Linda’ asked.  I knew she was Linda, because she was sporting a fetching name badge telling me that she was the ‘fitting assistant’.

Well to be honest, I had no idea that you had to make an appointment.  They didn’t mention that on the tannoy, and crikey, I only wanted a quick measure up.  Anyway, Linda said they could fit me in if I would care to wait a few minutes.

Eventually, she showed me into the changing room, and told me to whip my blouse off.  The measuring took place under unforgiving lights which made my flesh look like risen dough. Fortunately I didn’t have to remove my underwear so some dignity was retained.  Just.

She gave me the verdict.

‘Ah, you’re in between sizes’

Having immediately discounted my original choices, she went off in search of the perfect item.  She brought back half the shop.  All different sizes and shapes.  Good grief, did you know that you can be a different size according to what shape the ‘cup’ is? Or that it’s ‘dangerous’ if the wires sit too far round the side and your boob isn’t fully wedged in there?  What the hell does that mean? Dangerous!  Thanks to Linda I now have instilled in me a morbid fear of ill-fitting bras.

I must have tried on dozens.  Some were too squishy, some made me look like a ship in full sail, some were too baggy (Linda took her life in her hands when she told me that ‘older people lose their muscle tone up there’. She was darn lucky I didn’t show her exactly what muscle tone I’ve got in my right hook, I can tell you) some made me flob out over the top, some moved about when I swung my arms over my head.  Who knew I was such an odd shape?

I was feeling quite discombobulated (boobulated?? I was going to say deflated but that wasn’t the case at all), when she eventually bought one in that vaguely fitted.

‘Ooh I like that one, that’ll do’ I said, a little bit too overenthusiastically.

She stood there, hand on chin, sucked her teeth like a mechanic inspecting your tyres

‘No, it’s too tight. I’ll get you the next size’ and before I could object she disappeared through the curtain.  Needless to say the next size up replacement was way too big.  Ho hum.

It took another few abortive attempts before she bought me that same bra again.

‘I’d picked up the wrong size before’ she admitted.  ‘This one should be better’.

By then, I could only just about manage a tight-lipped smile. I’d been trying on bloomin’ bras for the last three-quarters of an hour, I was having this darn thing whether it fitted or not.

It was, of course, about three times the cost of the one’s I originally picked up and, miraculously, it was the same size as those.  Who needs a fitter?

After I’d paid for my mega fitting bra, I went to another shop.  Their underwear was on special offer.  I bought two bras without trying them on.  They fit perfectly. 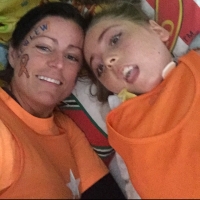